To end the year with a boom, in this week’s survey for our 2RedBeans users, we decide to touch on a sensitive, provocative yet intriguing topic: friends with benefits, or FWB in short.

The definition of FWB is as such: a relationship that has companionship (the friends part) that involves something intimate, such as making out and sex (the benefits part).

Let’s jump right into the numbers, shall we? *rubs hands* 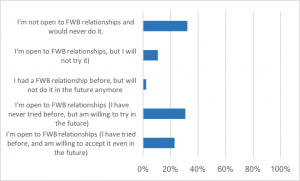 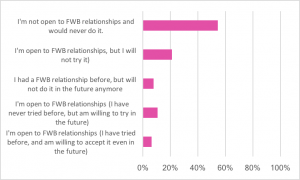 “Sex is a symbolic ritual. Do it only after you are married.”
“If a girl is not a virgin, she would have a hard time to find a guy to marry to because she is not pure anymore.”

In fact, it might even be hard to believe that majority of Asians are open to the idea of having friends with benefits. (I’m sure you are probably smirking in front of your screens, agreeing with what I’ve said)

However, patriarchy and tradition are just some reasons for people to be skeptical of a relationship solely for sexual benefits. Putting them aside, as the society modernizes, another reason arises. In general, people are highly skeptical of sexual relationships. How is it possible for someone to have sex over and over again, without falling in love with that person? Others think that these sexual relationships are based on compulsive sexual desires that are deprived of emotion.

In my opinion, I think that there is an in-between, sort of like a “median line”, for love and having sexual relationships for the sake of it. There are no hard and fast rules to follow. Think of it this way: you could have an intimate relationship, yet you do not have to come under the burden of expectations, jealousy.. that sort of obligations you would face in a highly invested (emotionally) relationship. Expectations lead to disappointment, jealousy leads to resentment. In summary, you are in a relationship without having to have the ownership of your partner.

We are taught (more so, I believe, for Asians) that marriage is the end goal, and if you fail to achieve it, you have failed entirely. I believe that having a relationship of friendship solely for sexual benefits can provide enlightening and fulfilling perspectives. These perspectives can be ignored due to our emotional investment in a serious, marriage-as-an-end-goal kind of relationship with someone. Have an open mindset, and you could even possibly learn more about yourself!

This is, of course, solely my own opinion! Feel free to debate about it. Leave your comments down below!

Happy New Year folks, and see you next year.

Would You Date Someone Younger or Older Than You?