In the past, moving in with your partner before marriage was thought of as immoral. However, these days it’s become so common that two thirds of couples have lived together beforehand.

The perks of moving in with your partner before marriage can’t be denied. You get to experience first hand what it’s like living together and it can even serve as a trial run before the actual marriage. However, the success of your cohabitation may depend entirely on how early or late you move in together!

One intriguing fact that we found was that moving in after dating for less than six months is the second most popular choice with one-third of the respondents citing that it is fine to do so. Moving in too late was an unpopular choice with only 9% of respondents choosing to move in together after two years of dating. Surprisingly, more people chose to move in after more than three years together (8.66% of respondents) compared to moving in at the two to three-year mark (5.15%). 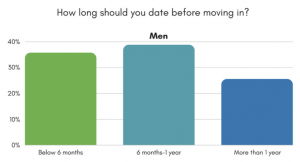 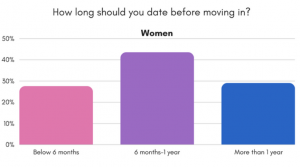 From the results, it’s clear that women are the conservative ones. 27.5% of women think that moving in after dating for less than 6 months is acceptable, whereas 35.7% of men think that way. Perhaps, women think that it is better to know someone for longer before taking that big step. This makes sense as sometimes rushing in to a relationship isn’t good for the relationship’s momentum.

From the survey results, we can map out the general opinion of our respondents. You should know pretty well by six months or a year if things are going well enough to consider moving in together. If you don’t know by two to three years, then don’t you already have your answer? In addition, with 71% of respondents citing that the best stage of a relationship to move in together is after both parties agree to date exclusively, we could possibly conclude that both men and women want some sort of ‘confirmation’ and ‘assurance’ before deciding to move in together, No marriage proposals or approvals from parents are needed for them to decide on doing so. At least when one side says “I shouldn’t have moved in with you!”, the other side can say that “Hey you agreed to it, we both agreed to it!”.

Of course, there are still some people who think that cohabitation before marriage is unacceptable. 76.2% of them personally think that they cannot accept living together before marriage. Some reasons cited are they treasure their precious personal space. Some even responded with links to a study conducted on divorce statistics and living together (you can read one of them right here). Of course, there are also religious reasons holding them back.

It’s true that through cohabitation, you can experience first hand what it’s like living together before both of you lockdown your relationship with marriage. You can share bills, rent and Netflix and chill every day if you want. However, living together also reveals a side of your partner that you’ve never seen (grooming habits, bathroom usage etc). Can you handle it? Does it endear you to the person? These are questions to ponder upon.

Cohabitation is a gamble. Played right, the perks are wonderful, but you won’t know until you try.